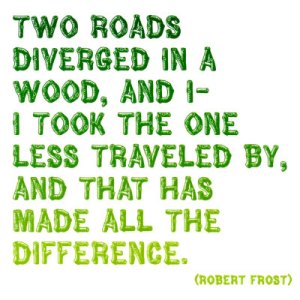 When I was little I would wake up in the middle of the night seized by a fear of monsters in my closet. I would see these huge shadows on my wall and think it was only a matter of minutes before I was gobbled up. I would run to my parents room and climb into bed with them–safe from whatever was lurking in my room.  After trying to reassure me that there were in fact no monsters in my closet, my dad would have to take me back to my room, turn on the lights, and then show me there was nothing in my closet but my clothing. Eventually, I realized that shadow I saw every night, the one that led to my parents room and my dad’s nightly closet sweep, was just my closet door. Once I realized that it was just my door, I started shutting that door every night before I went to bed.

As a child, I spent a lot of nights clinging to my blanket afraid of something that wasn’t real. As an adult, I have spent a lot of time clinging to the safe path because when I consider the alternative all I see are monsters. The road less traveled is less traveled for a reason. I mean who wants to take a path that hasn’t been cleared and leads to who knows what?

I don’t think I can stay here, but I am not sure I can go there.

The trees on the other road look a lot like failure, loneliness, discomfort and difficulty. The road less traveled seems like the perfect place for monsters.

The other road terrifies me.

Maybe that’s what the Israelites were thinking in Numbers 13 and 14, when 10 of the 12 spies came back from Canaan, “the land of milk and honey,” with stories of giants and fortified cities.  They heard the word “giant” and they were afraid.  So afraid they began to long for the oppression of the Egyptians despite the reminders from Joshua and Caleb that God had promised them Canaan, and while there were giants, the giants did not have God on their side.

Their fear meant that an entire generation missed out on the promised land. They allowed their fear to keep them from the abundant life God truly meant for them. They saw giants and missed their inheritance. They probably thought, like I often do, it’s my inheritance so this should be easy. It shouldn’t require a struggle and I should be able to walk right into it.

But, what if the scariest looking road is the only one that leads to the promised land?

What if the Israelites had just remembered that the God they served had split the Red Sea and caused it to swallow the entire Egyptian army?

What if they had remembered the words He had spoken to them when He led them out of Egypt?

“I will bring you to the land which Iswore to give to Abraham, Isaac, and Jacob, and I will give it to you for a possession; I am the Lord.” Exodus 6:8

Just like my closet door was not scary once the lights were on, the giants aren’t really that scary when considered in light of the promises of God.

I don’t want to miss out on my promised land, my buttermilk biscuits smothered in honey, because the less traveled road looks scary.  Because maybe those monsters are just shadows, maybe God and I are going to slay those giants, or maybe I am going to learn to live courageously even when surrounded by giants ?

Who knows? But, I won’t know for sure if I stay on the safe path. Staying on the safe path has it perks, it’s a giant-free zone, but it’s also hot and empty. The life of the road less traveled seems pretty scary precisely because it is so risky. Yes, there are giants, but there is also abundance and provision. I could allow the giants to keep me on the safe road, or I could remember that those monsters are just shadows and that giants ain’t got nothing on a girl with five stones and her Jesus.

There was an error retrieving images from Instagram. An attempt will be remade in a few minutes.